The “Buffett Indicator” has hit levels unseen since the dot-com bubble, and Bitcoin could see a major reaction in the event of a major crash in stocks.

The “Buffett Indicator” is hinting that the United States’ stock market is currently at dot-com bubble levels, Yahoo Finance reported on Aug. 20. The indicator divides the Wilshire 5000 Index by the GDP of the U.S.

Meanwhile, on Aug. 14, Warren Buffett-led Berkshire Hathaway invested in Barrick Gold, the second-biggest precious metal miner in the world. Some analysts said it could benefit Bitcoin (BTC) in the long term as it coincides with this stock market bubble alarm.

The historical average of the indicator is 1, and before the dot-com bubble, it hovered at 1.71. Currently, the Buffett Indicator is reportedly at 1.7, signaling that the stock market is highly overvalued.

If the U.S. stock market slumps as investors fear the overvaluation of equities, Bitcoin could see a major reaction.

Does this provide any glimpse into Bitcoin’s long-term trend?

According to Tom Essaye, the founder of Sevens Report Research, stocks are considered as “fundamentally overvalued” when the Buffett Indicator hits 1.3.

The current level of 1.7 indicates that there is a potential for a steep downtrend in the stock market if the trend reverses. He explained:

“What does that mean for us? It means stay long stocks in longer-dated accounts, and make sure you own assets (such as a house, etc.). But it also means this asset inflation cycle better not stop, because as the 1.7 times total market cap to GDP ratio tells us if asset inflation stops, it’s a long, long way down to fundamental support.”

Throughout the past four months, Bitcoin has shown some correlation with the S&P 500 and gold. Since late July, due to the decline in the U.S. dollar, BTC has more closely followed the price of the precious metal.

An argument could be made that a potential pullback in the U.S. stock market could strengthen Bitcoin’s momentum. Some institutions have started to consider Bitcoin as a legitimate store of value, causing institutional inflows into BTC to spike. 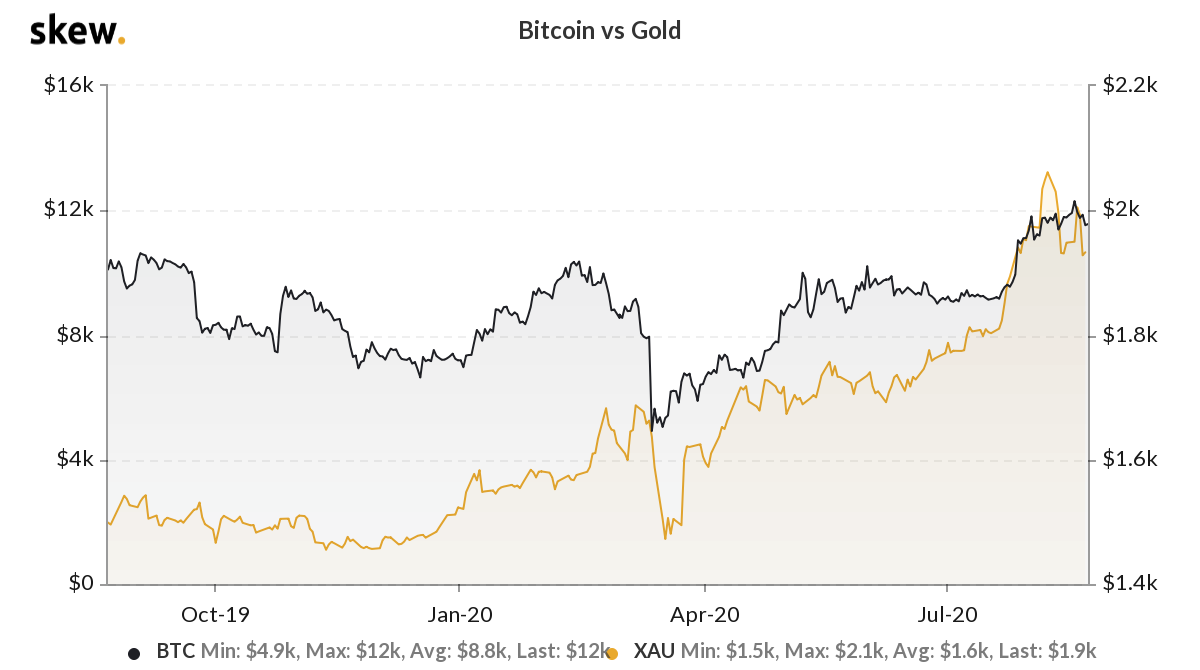 The correlation between Bitcoin and gold. Source: Skew.com

The deteriorating correlation between Bitcoin and the U.S. stock market, and the simultaneous slump of BTC and gold, buoy the bull case for BTC when stocks decline.

What do technical analysts think in the near term?

In the short term, technical analysts are cautiously anticipating a consolidation phase for Bitcoin.

Michael van de Poppe, a full-time trader at the Amsterdam Stock Exchange, said dropping below $11,500 again could lead to a bearish divergence. He said:

Robert Kiyosaki, the best-selling author of “Rich Dad Poor Dad,” also said that a banking crisis is coming. Emphasizing that Buffett has trimmed his positions in major U.S. banks, he hinted gold, silver, and Bitcoin could see significant gains as safe-haven assets.

The confluence of a tightening correlation between Bitcoin and gold and the rally of the stock market could raise the likelihood of a BTC uptrend when stocks begin to fade.